skip to main | skip to sidebar

We are at that turn of the seasons where the difference between whisky and whiskey become all too apparent. The trouble is that I like both too much . . . well, not too much, in terms of quantity, but too much in terms of having particularly expensive tastes.

That, and I am developing an interest in local boutique beverages. Here is one that I have been enjoying now that it is warmer here in southern New Mexico (yes, it does get cold here, particularly if you have lost all of your cold-hardiness): 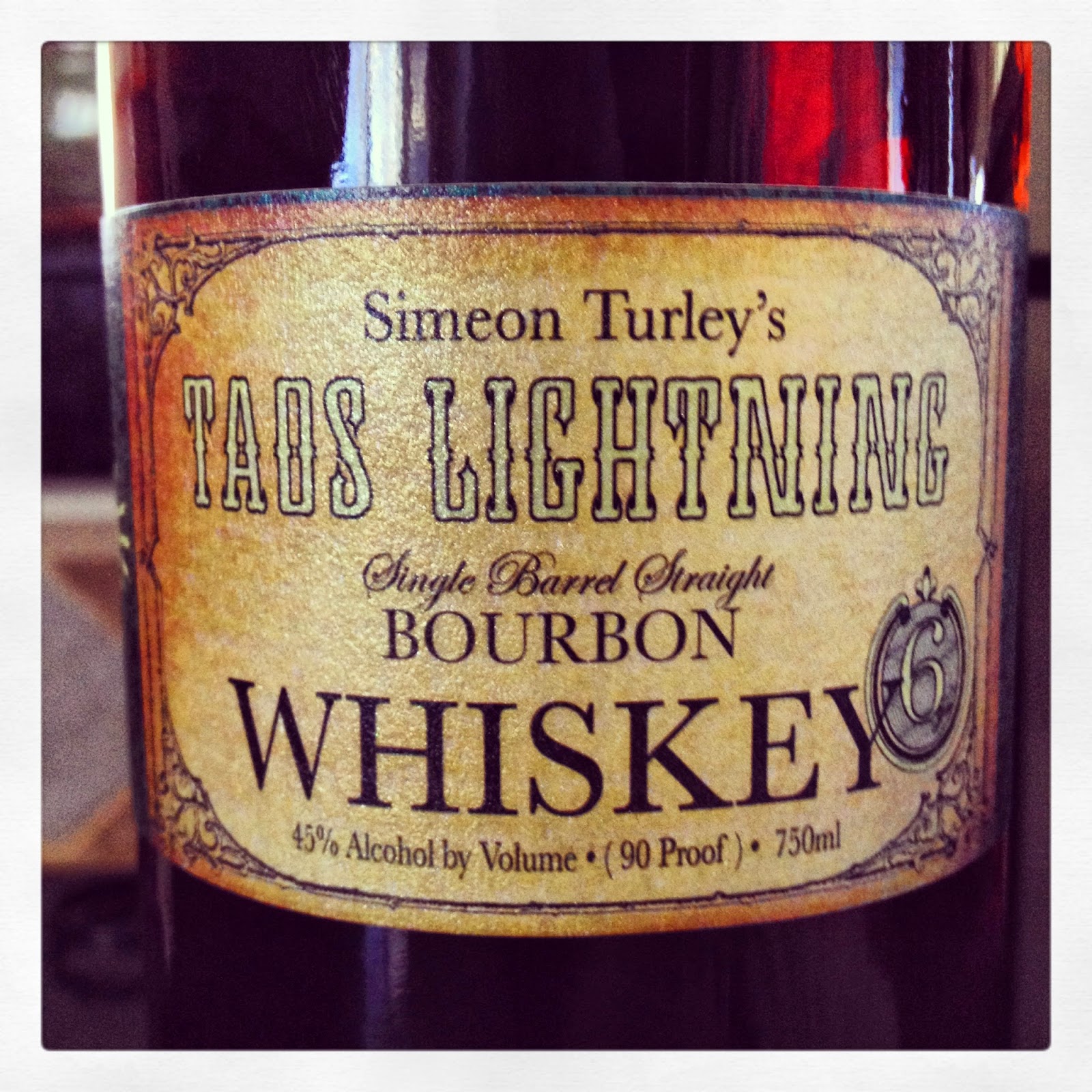 It is made in the Taos area by the Rancho de Los Luceros Destilaria; this is their 'top shelf' version: single barrel, aged 6 years. It is VERY good. Unfortunately, you will have to come to New Mexico to enjoy it.

The first local whisky that I tried is made by Santa Fe Spirits: 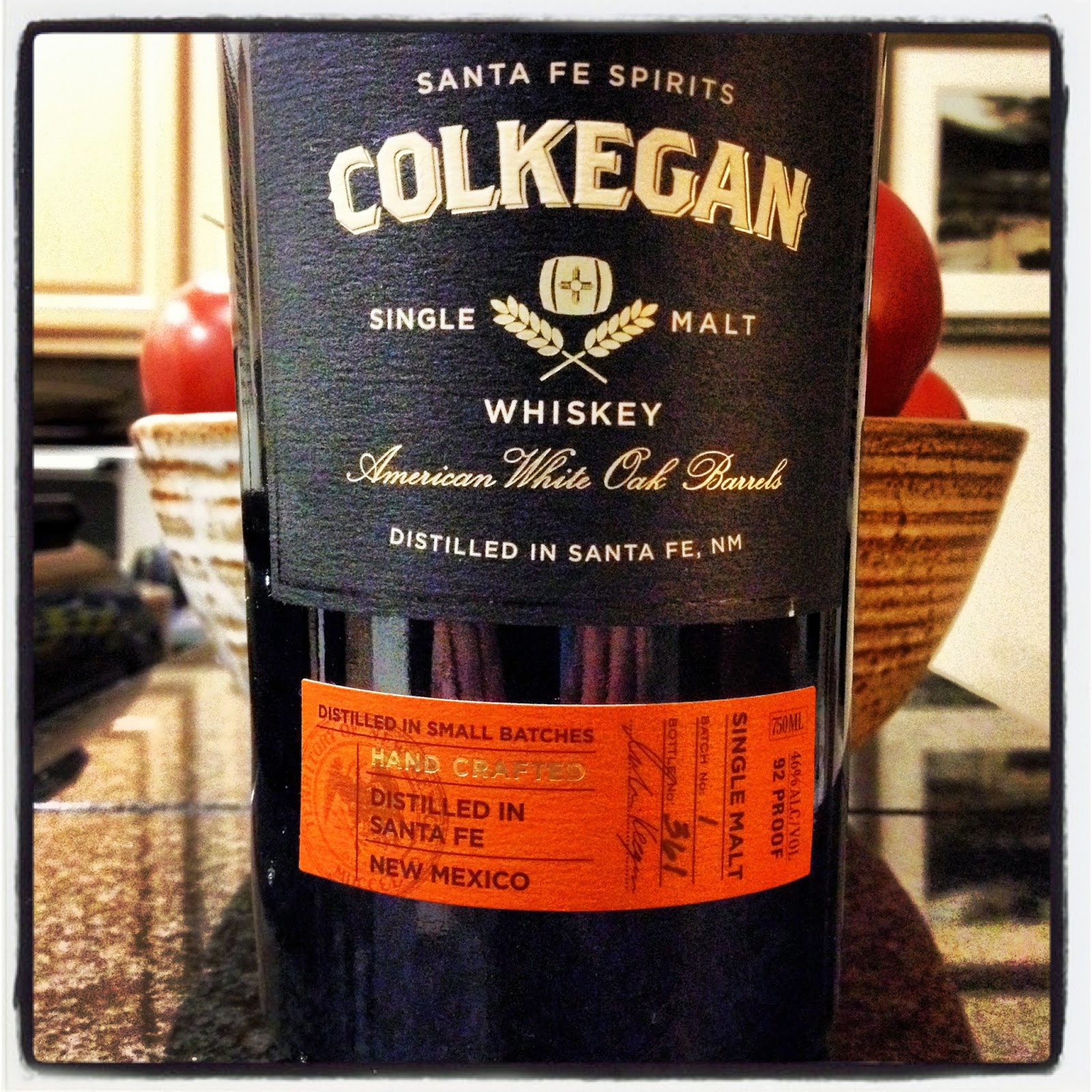 Note the Americanized  spelling of 'whiskey.' This is really a single-malt, aged, malted barley whisky, in the traditional Highlands sense of the word and work; but they cannot call it 'scotch' because it is NOT made in Scotland. Santa Fe Spirits also bottle some of the malted barley whisky straight from the still. They call it Silver Coyote and, well, unaged whisky is interesting. There is an undeniable sweetness, not unlike silver tequila. I'll bet that it would make a great Margarita once it gets warm enough, say, around May 5th.

As I said above, we are at that seasonal cusp where some nights it is cool enough to warrant the smoky warmth of a good Islay malt whisky (my favorites are Lagavulin, Bruichladdich, Laphroaig, and Ardbeg; Talisker is in there as well, despite being an Isle of Skye spirit). Other nights it is warm enough that you want a good bourbon, on ice. So, depending, this time of year you will find me with a glass of either in one hand and a book in the other, sitting on the patio (because it IS warm enough for that).

Stop by. Look for the Margarita burning in the window and you'll know you have the right place.

One of the many things that have sucked me in lately is the notion of a turn. Not as in making a left or right turn, or a U-turn (though, by mapping politics onto the notion one could relate it to those). Rather, the notion of a turn as a trope become a terministic screen. Recall that our word trope comes from the Greek τρόπος, which can mean 'turn' and, which, in literature and rhetorical studies refers to 'turns of a phrase,' that is, figurative language, metaphor, and so on. For those familiar with the work of Kenneth Burke, the idea of a terministic screen will be a commonplace; for those not, think of a terministic screen as the conceptual lens through which you look out on the world. It includes all of your personal assumptions and biases, your expectations, your notions of what constitutes reality and whether or not it can be known with any certainty. To steal a word or two from Pierre Bourdieu, it is your habitus, the doxa with which you are ortho- (or hetero-, if feeling contrary). Interestingly, one can have many different terministic screens, depending on what one is doing . . .

So, now to the business of turns and my engagement with them.

It is fashionable in theory (that is, IN the world of THEORY, not 'theoretically) to talk about particular ways of thinking (and writing and talking) about the world and theory as a turn, as in Richard Rorty's 1967 book, The Linguistic Turn. Well, there have been a variety of turns that have cropped up over time and I finally decided someone (me) needed to start a list, if only to have them all in one place. Ideally, though, I would like to expand the list to include origins and adherents and intents.

And here is what I have collected so far, in no particular order other than when they presented themselves to me:

From the operative word (italicized) in each phrase, one can see quite clearly how these turns are each and all ways of engaging with, looking at, and/or responding to the world as we encounter it. Each is, in one way or more, a metaphor (turn, trope) through which we read the world. Each is a terministic screen, however thin, however temporary, that affects (and effects) our understanding.

Recently, in a session of my Qualitative Research Methods class, the instructor asked that each of us come up with a metaphor for our particular notion of a 'researcher.' STRUGGLE STRUGGLE STRUGGLE. You could read it on the faces of everyone in the room . . . you could smell the smoking oil and hear the grinding gears:

But we did have some minutes to think about it. Thankfully . . .

This exercise was no where near as easy as the impromptu assignment given in a 'Think Outside the Box' seminar I attended. There, all I had to do was come up with a cartoon or comic character with which I identified; there was, though, a caveat: I also had to come up with three reasons why. The answer, at that time, came to me in a flash: Yosemite Sam . . . and the reasons? Well . . .

I don't know why--particularly given my work on simile and metaphor (or maybe because of it)--but I found this exercise particularly difficult . . . until, that is, I started to think outside of the box.

A day or two before, Laurie and I had watched a PBS program about Brunelleschi's Dome in the Florence Cathedral. It was (and still is) an engineering marvel, in terms of its size, the techniques by which it was constructed, and the development of special construction tools to raise and lower materials to the work site, 200+ feet above the ground.

But, it was the bricklaying technique that caught my imagination: a self-reinforcing herringbone that interrupted the shear planes and transmitted and shared the structural load. Courses of brick were aligned using 'lines' that passed through one another as they ran from a flower pattern to the exterior face of the dome. In the program, modern bricklayers were (re)learning Brunelleschi's construction techniques by building a smaller, replica dome. Brunelleschi was neither a trained architect nor engineer; he was a master goldsmith. Yet, he became one of the foremost engineers and architects of the Renaissance. And, the dome of the Florence Cathedral is, arguably, his masterpiece.

So . . . getting back to the metaphor. Thinking outside of the box, I reasoned that researchers are curious about the hows, the whys, the wherefores of phenomena; otherwise, why would they pursue learning about those things? And, the results of their research work are built in layers that are interconnected in ways not unlike the courses of brickwork in Brunelleschi's dome. In fact, some theories of qualitative research refer to the process and the researcher in terms of the postmodern notions of bricolage and bricoleurs; for example, while 'writing' this post, I just stumbled upon this looking for some links that might help my notions make more sense.

Apparently, Claude Lévi-Strauss is credited with coining the term bricoleur. You can find his explanation of the term in The Savage Mind (1962, translated to English in 1966). The book is still in print and, in my opinion, is a good read as well as a good example qualitative research.

And my metaphor? How did it go over? It was well accepted and, apparently, I was not the only one thinking in this way. A fellow student also thought in terms of 'construction' but in relation to Leggos. In both metaphors, the notion of interlocking 'brickwork' played a crucial role.

on the bookshelf, waiting to be read:

Some web spots that interest me: